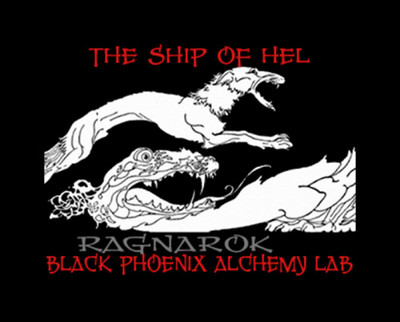 The Ship of Hel

Jörmungand, the serpent that encircles the world, reared itself up from the sea. The waters flooded the lands, and the remnant of the world's inhabitants was swept away. That mighty flood floated Naglfar, the Ship of Nails that the Giants were so long building, and floated the ship of Hel also. With Hrymer the Giant steering it, Naglfar sailed against the Gods, with all the powers of Jötunheim aboard. And Loki steered the ship of Hel with the Wolf Fenrir upon it for the place of the last battle.

Black oak and sprucewood with opoponax, myrrh, black ambergris, and the silent ice of Niflheimr.