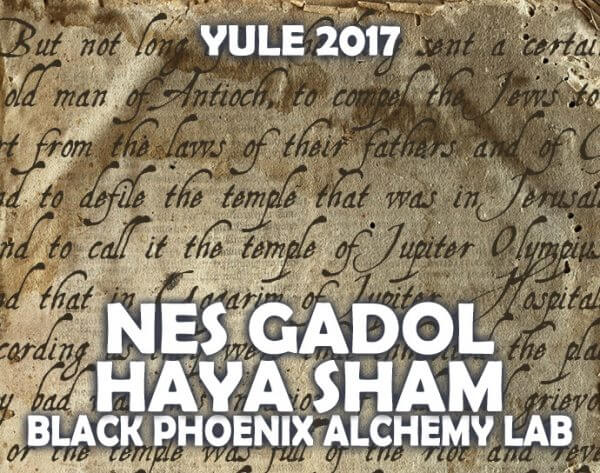 But not long after the king sent a certain old man of Antioch, to compel the Jews to depart from the laws of their fathers and of God:

And to defile the temple that was in Jerusalem, and to call it the temple of Jupiter Olympius: and that in Gazarim of Jupiter Hospitalis, according as they were that inhabited the place.

And very bad was this invasion of evils and grievous to all.

For the temple was full of the riot and reveling of the Gentiles: and of men lying with lewd women. And women thrust themselves of their accord into the holy places, and brought in things that were not lawful.

The altar also was filled with unlawful things, which were forbidden by the laws.

And neither were the sabbaths kept, nor the solemn days of the fathers observed, neither did any man plainly profess himself to be a Jew.

But they were led by bitter constraint on the king’s birthday to the sacrifices: and when the feast of Bacchus was kept, they wore compelled to go about crowned with ivy in honour of Bacchus.

And there went out a decree into the neighboring cities of the Gentiles, by the suggestion of the Ptolemeans, that they also should act in like manner against the Jews, to oblige them to sacrifice:

And whosoever would not conform themselves to the ways of the Gentiles, should be put to death: then was misery to be seen.

For two women were accused to have circumcised their children: whom, when they had openly led about through the city with the infants hanging at their breasts, they threw down headlong from the walls.

And others that had met together in caves that were near, and were keeping the sabbath day privately, being discovered by Philip, were burnt with fire, because they made a conscience to help themselves with their hands, by reason of the religious observance of the day.

In order to consolidate his power in Jerusalem and Hellenize the area, the Greek king Antiochus IV Epiphanes outlawed Judaism and ordered the population to worship Zeus and the Hellenic pantheon. As this was anathema to the Jews, they refused, and Antiochus moved to enforce his religious decree by extreme force.

Some origin tales say that the dreidel was used at this time as a method by which the Jewish people were able to continue to study the Talmud in secret under the guise of gambling. Now, in addition to being a light gambling game, the dreidel is also a reminder of the strength, devotion, and perseverance of the Jewish people and the mercy of God.

One scent in four parts:

Nun, the Snake: nuun, nothing. Naḥš, in modern Arabic, means bad luck. Represented by scents of loss and remembrance: opoponax and lemon verbena.

Gimel, the Camel: the Ship of the Desert. Represented by scents of abundance, fortitude, and determination: patchouli, heliotrope, pomegranate, and almond.

He, the Window: sometimes used to represent the Unutterable Name of God, this is the window in our souls through which God’s light touches us. Represented by scents of clarity and piety: frankincense, myrtle, and hyssop.

Shin, the Tooth: also stands for Shaddai, one of the names of God. The hand formed into shin acts as a priestly blessing. Represented by scents of strength, generosity, kindness, and benediction: carnation, myrrh, red poppy, and hibiscus.

The essences of Nun, Gimel, He, and Shin are blended to become Nes Gadol Haya Sham.