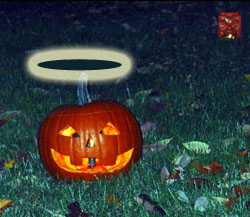 Now you know, the secret is out. The pumpkin is in rehab. It had to happen when he rolled down the street stoned out of his mind. The cops got him. After an unbecoming altercation in lockup, he was released to a cushy rehab clinic. He reads enriching books, goes to wholesome talks, meets uplifting people and thinks more of pies now than crack pipes. Or, does he? Does the pumpkin have a secret supplier of contraband? Is the pumpkin just incapable of straightening up and flying right? One thing you have to say about him though, he sure smells good.

That is a photo of pumpkins on my front yard at Halloween last year. The pumpkin is trying to be a model citizen there.