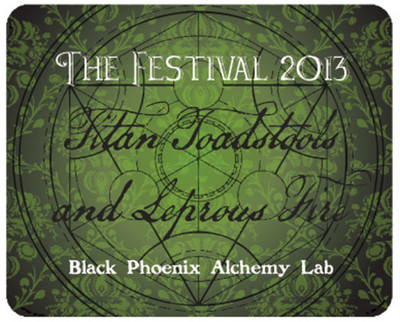 Fainting and gasping, I looked at that unhallowed Erebus of titan toadstools, leprous fire, and slimy water, and saw the cloaked throngs forming a semicircle around the blazing pillar. It was the Yule-rite, older than man and fated to survive him; the primal rite of the solstice and of spring's promise beyond the snows; the rite of fire and evergreen, light and music. And in the Stygian grotto I saw them do the rite, and adore the sick pillar of flame, and throw into the water handfuls gouged out of the viscous vegetation which glittered green in the chlorotic glare. I saw this, and I saw something amorphously squatted far away from the light, piping noisomely on a flute; and as the thing piped I thought I heard noxious muffled flutterings in the foetid darkness where I could not see. But what frightened me most was that flaming column; spouting volcanically from depths profound and inconceivable, casting no shadows as healthy flame should, and coating the nitrous stone above with a nasty, venomous verdigris. For in all that seething combustion no warmth lay, but only the clamminess of death and corruption.