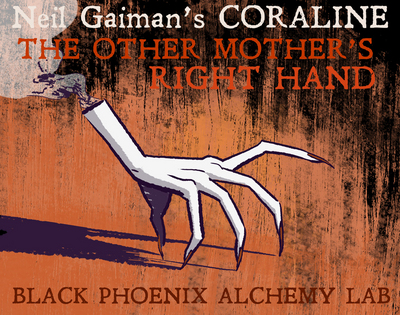 The Other Mother's Right Hand

Coraline opened the front door and looked at the gray sky. She wondered how long it would be until the sun came up, wondered whether her dream had been a true thing while knowing in her heart that it had been. Something she had taken to be part of the shadows under the hall couch detached itself from beneath the couch and made a mad, scrabbling rush on its long white legs, heading for the front door.

Coraline's mouth dropped open in horror and she stepped out of the way as the thing clicked and scuttled past her and out of the house, running crablike on its too-many tapping, clicking, scurrying feet.

It was the other mother's right hand.

It wanted the black key.

A scrabbling, skittering, clacking scent: white as bone, black as a beetle, and red as blood — orris root, vetiver, and daemonorops.