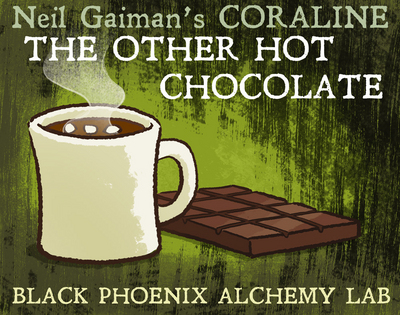 The Other Hot Chocolate

The other mother took the bacon from under the grill and put it on a plate. Then she slipped the cheese omelette from the pan onto the plate, flipping it as she did so, letting it fold itself into a perfect omelette shape.

She placed the breakfast plate in front of Coraline, along with a glass of freshly squeezed orange juice and a mug of frothy hot chocolate.

"Yes," she said. "I think I like this game. But what kind of game shall it be? A riddle game? A test of knowledge or of skill?

"And what is it you think you should be finding in this hide-and-go-seek game, Coraline Jones?"

Coraline hesitated. Then, "My parents," said Coraline. "And the souls of the children behind the mirror."

The other mother smiled at this, triumphantly, and Coraline wondered if she had made the right choice. Still, it was too late to change her mind now.

"A deal," said the other mother. "Now eat up your breakfast, my sweet. Don't worry-it won't hurt you."

Coraline stared at the breakfast, hating herself for giving in so easily, but she was starving.

"How do I know you'll keep your word?" asked Coraline.

"I swear it," said the other mother. "I swear it on my own mother's grave."

"Does she have a grave?" asked Coraline.

"Oh yes," said the other mother. "I put her in there myself. And when I found her trying to crawl out, I put her back."

"Swear on something else. So I can trust you to keep your word."

"My right hand," said the other mother, holding it up. She waggled the long fingers slowly, displaying the clawlike nails. "I swear on that."

Coraline shrugged. "Okay," she said. "It's a deal." She ate the breakfast, trying not to wolf it down. She was hungrier than she had thought.

She drank the orange juice, but even though she knew she would like it she could not bring herself to taste the hot chocolate.