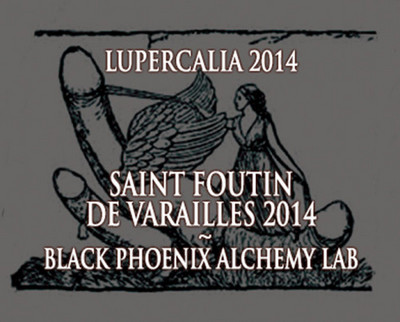 Echoing the worship of ancient fertility gods, some early Christians attributed the power to grant blessings of reproductive fruitfulness to Christian saints through accidents of folk-etymology. A syncretic saint of questionable origin, he is possibly the result of a merging of the deity Priapus, or Mutinus Mutunus, and the sainted, semi-mythical first bishop of Lyons, Ponthius, often pronounced Fontin by the common folk of France where his veneration was concentrated. Saint Foutin's name is an amalgamation of Pothinus and the verb foutre, which means "to fuck", effectively granting this saint the prerogatives and powers of his predecessor, Priapus.

Saint Foutin was said to cure venereal diseases and other genital maladies, grant fruitfulness to women, and restore potency to men. Scrapings of stone from the groin of one of the saint's statues in France was said to cure all sexual ailments. At other shrines, offerings of wine were poured onto the saint's penis, and worshippers molded ex votos in wax shaped to represent their afflicted body parts to leave in his care, either at the foot of his statue or hanging from the roof of his shrine.

Beeswax, frankincense, dried rose petals, and a dribble of wine.