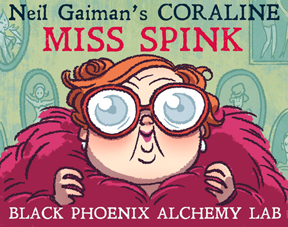 "You see, Caroline," Miss Spink said, getting Coraline's name wrong, "both myself and Miss Forcible were famous actresses, in our time. We trod the boards, luvvy. Oh, don't let Hamish eat the fruitcake, or he'll be up all night with his tummy."

Both Miss Spink and Miss Forcible scents have a bit of tea splash and biscuit crumbs.