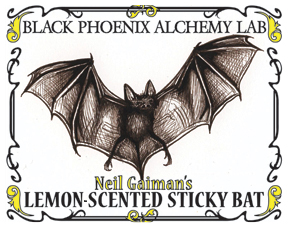 ...last week Maddy woke me up early in the morning.

"Daddy," she said, "There's a bat on the kitchen window."

"Grumphle," I said and went back to sleep.

Soon, she woke me up again. "I did a drawing of the bat on the kitchen window," she said, and showed me her drawing. For a five year old she's a very good artist. It was a schematic of the kitchen windows, showing a bat on one of the windows.

"Very nice dear," I said. Then I went back to sleep.

When I went downstairs...

We have, instead of dangling fly papers, transparent strips of gluey clear plastic, about six inches long and an inch high, stuck to the windows on the ground floor. When they accumulate enough flies, you peel them off the window and throw them away.

There was a bat stuck to one. He was facing out into the room. "I think he's dead," said my assistant Lorraine.

I peeled the plastic off the window. The bat hissed at me.

The question then became, how does one get a bat (skin and fur) off a fly-strip. Luckily, I bethought me of the Bram Stoker award. After the door had fallen off (see earler in this topic) I had bought some citrus solvent to take the old glue to reglue the door on.

So I dripped citrus solvent onto the grumpy bat, edging him off the plastic with a twig, until a lemon-scented sticky bat crawled onto a newspaper. Which I put on the top of a high woodpile, and watched the bat crawl into the logs. With any luck he was as right as rain the following night...