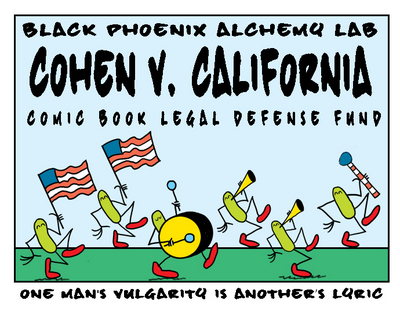 CBLDF is proud to premiere the new Black Phoenix Alchemy Lab fragrance Cohen v. California at WonderCon! Based upon the landmark First Amendment case that explicitly acknowledged profanity as protected speech, Cohen v. California celebrates the notion that "one man's vulgarity is another's lyric." This special premiere is accompanied by an all-new signed and numbered print by Beanworld creator Larry Marder!

This premiere edition of Cohen v. California is strictly limited to 50 pieces, and will be available at the CBLDF, booth 323, during WonderCon, April 1-3, 2011, in San Francisco, California!

"For, while the particular four-letter word being litigated here is perhaps more distasteful than most others of its genre, it is nevertheless true that one man's vulgarity is another's lyric." Justice John Marshall Harlan II

In April of 1968, Paul Robert Cohen was arrested for wearing a jacket emblazoned with "Fuck the Draft" inside a Los Angeles County Courthouse. He was convicted of violating California Penal Code § 415, prohibiting "maliciously and willfully disturb[ing] the peace or quiet of any neighborhood or person [by] offensive conduct," and was sentenced to thirty days imprisonment.

On April 26, 1968, the defendant was observed in the Los Angeles County Courthouse in the corridor outside of division 20 of the municipal court wearing a jacket bearing the words "Fuck the Draft' which were plainly visible. There were women and children present in the corridor. The defendant was arrested. The defendant testified that he wore the jacket knowing that the words were on the jacket as a means of informing the public of the depth of his feelings against the Vietnam War and the draft.

In affirming the conviction, California's Court of Appeal held that offensive conduct translates to "behavior which has a tendency to provoke others to acts of violence or to in turn disturb the peace," and that "it was certainly reasonably foreseeable that such conduct might cause others to rise up to commit a violent act against the person of the defendant or attempt to forcibly remove his jacket."

However, the US Supreme Court granted a writ of certiorari, and the case went off to the highest court in the land. In essence, the Supreme Court had to decide whether or not Cohen's unseemly speech was punishable or protected under the auspices of the First Amendment. The Court held, by a vote of 5-4, that "Absent a more particularized and compelling reason for its actions, the State may not, consistently with the First and Fourteenth Amendments, make the simple public display of this single four-letter expletive a criminal offense." Cohen, by way of his "Fuck the Draft" jacket, was not tossing out "fighting words," and was not provoking violence through his sartorial display. The Court denied the State the broad power to control its citizens in the name of creating a clean, civil society through the censorship of public discourse: "[T]he issue flushed by this case stands out in bold relief. It is whether California can excise, as "offensive conduct,' one particular scurrilous epithet from the public discourse, either upon the theory . . . that its use is inherently likely to cause violent reaction or upon a more general assertion that the States, acting as guardians of public morality, may properly remove this offensive word from the public vocabulary."

Pick up Cohen v. California, an exclusive new scent from Black Phoenix Alchemy Lab with a signed and numbered print by Larry Marder, premiering at WonderCon 2011. This print & fragrance set is strictly limited to 50 pieces and available at CBLDF booth 323!