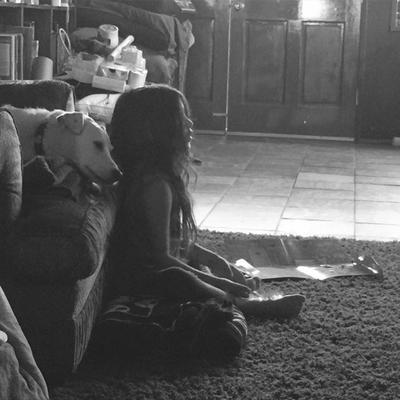 Blood and Judgement So Well Commedled

This year, Lilith started cultivating a love of Shakespeare, especially Hamlet. Man, this kid loves that play. I assumed, when we started talking about Shakespeare's works, that she'd love the comedies, particularly Midsummer Night's Dream and all its attendant fairies. Nope; it's all about the mopey Prince of Denmark and his teen angst.

When she started at her Shakespeare summer camp this year, one of her teachers asked which characters she liked best. She replied, "Horatio."

"Horatio? But he doesn't have many lines, does he? Why do you like him so much?"

"He's Hamlet's best friend, he's always there for Hamlet, and he's the only one that doesn't die."

This is a photo that I took of her watching Kenneth Branagh's Hamlet with her trusty sidekick, Wednesday. The dog, for her part, is a huge fan of the Two Gentlemen of Verona.